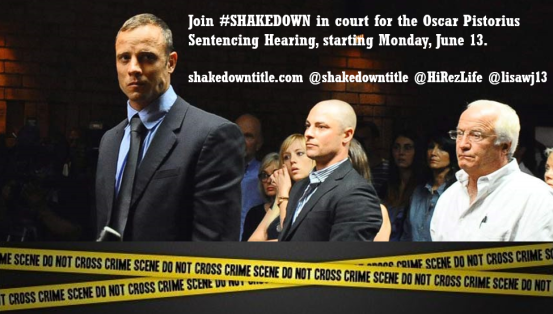 Oscar’s sentencing hearing is in full swing, and with the help of Nick, who’s on-site in the courtroom, we’ll be bringing you the sights and sounds from Pretoria [LIVE], right here on this page.  The most current updates will be posted at the top.  All time stamps are South Africa time.

Check out Nick’s recap from today on Soundclound.  He sat next to Marc Batchelor during the proceedings who couldn’t say enough bad things about Oscar – he truly hates the guy [no surprise].  Nick also met Gina Myers for the first time who he said was very friendly and sweet.  He had a chance to briefly talk to Barry who, despite the terrible circumstances for which they’re in court, was his usual Barry self… a kind, warm man. 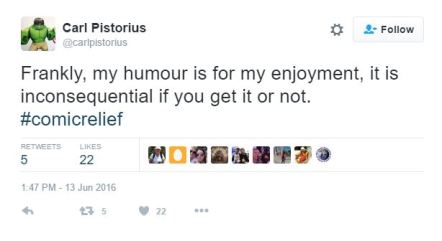 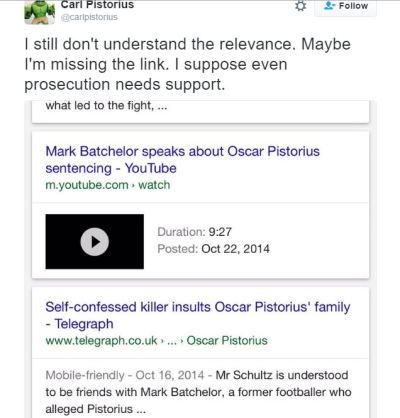 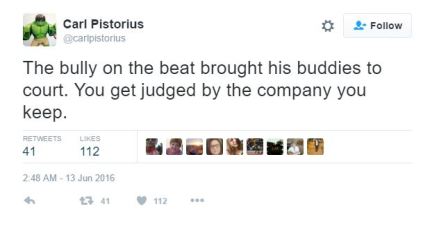 The defense has stated they’ll have two witnesses for this hearing.  One is Professor Jonathan Scholtz who testified today (Monday).  The second witness has not yet been named.  We don’t know how many witnesses the state will have, although we do know that Barry Steenkamp is expected to be one of them. 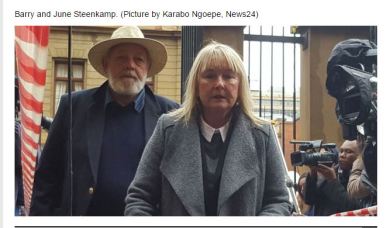 Here are some key points brought up by Scholtz, as reported by The Guardian:

12:10pm – Blow after blow, Nel calls out Oscar’s [and Scholtz’s] bullshit.  First, Oscar told Scholtz some sob story about how he saw a dead body [an inmate who had hanged himself] in prison and it traumatized him.  It turns out, he never saw what he said he did.  Oscar lied to Scholtz.  Then we find out that when Oscar’s cell was raided in July 2015 [as part of the Krejcir debacle] the medication, Cipralex, was found.  It’s not an illegal medication – it’s used to treat depression, OCD and GAD – the point was, it was against the rules for Oscar to have it, but Oscar being entitled, had it anyway.

As Nel requested a break, and the camera panned to Oscar, he look positively drugged.  I’m not sure I’ve ever seen Oscar so despondent.  Instead of the drooling, sobbing guy from 2014, this was a zombie version of Oscar. But as Nel so aptly put it, Oscar wasn’t so despondent that he couldn’t participate in a TV interview.

Nel busted out a few brand new stories about Oscar for the court.  The first one was a prickly little exchange with Captain van Aardt at a previous hearing.

“He [Oscar] confronted an investigator, Colonel [Mike] van Aardt directly, saying ‘please give us space and privacy, you didn’t do your job in any case’. That’s not a person who’s given up on life. That’s a person in charge,” prosecutor Gerrie Nel told psychologist Prof Jonathan Scholtz.

Then there was this:

He confronted one correctional services official, a sister Mashobane, in January, Nel said.  “He got so upset with sister Mashobane that he approached her in her office. He was shaking and he banged the table.”

11:52am – The debate about Oscar’s intentions is now officially over.  Sorry, you balloon-loving Pistorians!  Scholtz says Oscar does [now] admit that he intentionally shot “the person” behind the door.  Although, I get the sense he didn’t actually mean to admit that, but Nel certainly wasn’t gonna let him off the hook.

11:45am – Nel’s giving Scholtz a run for his money.  He stood up for June and read from her book her passage about forgiveness.  He pointed out to Scholtz that June forgave Oscar because her religion required her to do so.  It as for heading for herself  – it had nothing to do with excusing Oscar. 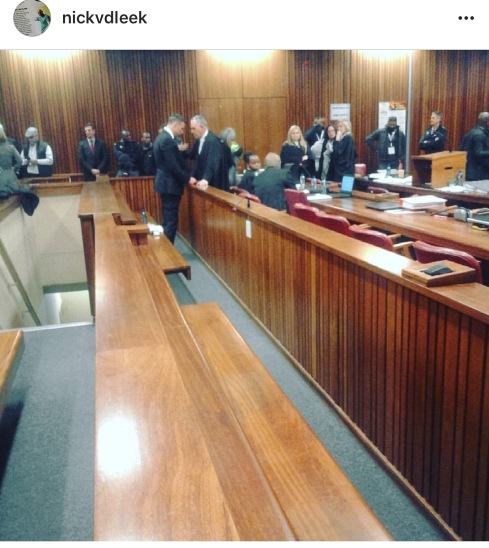 11:00am – One of Oscar’s mitigating factors, according to Scholtz, is that he wants to go to work for his uncle’s company.  Not quite sure how that’s relevant, but ok.  Oscar complained about the conditions in prison.  He got an infection in his stumps from the shower floor.  In perhaps the most insulting moment so far, Scholtz told the court that “the deceased’s” [not Reeva, the deceased] family has forgiven him and took money from him that they didn’t have to pay back.  Bastards!  Finally, before break, Scholtz ends off by saying there are two Oscars.  The one with his legs, and the one without.  There’s actually now a third Oscar too… the one who’s given up… cue violin.    Tea break.

10:45am – Some of the highlights so far:  Scholtz says Oscar’s condition is “severe.”  His depression is worse than it was in 2014.  His sister Aimee leaving town (for London) has been difficult because the two shared a close relationship – closer than the one he has with Carl.  The grand majority of this report is the same as the one delivered to the court in 2014.  Much emphasis has been put on his deceased mother and absent father.  He claims to now want nothing to do with guns. He spends a lot of time praying, and at church, and has taken solace that Reeva is now with God.  Wow, that’s generous.

10:06am – Dr. Scholtz from Weskoppies is first witness for defense.  I’m curious to see who he interviewed this time around.  Last time, it was basically just Oscar’s besties.

10:00am – Court starts on time.  Masipa is very slow getting to the stand.  There are no assessors for sentencing.

9:47am – What the hell is up with this picture??  Arnold looks like he’s on his way to hunt rhinos…

9:40am – Nick is now in the courtroom.  He said Gerrie is all smiles.  He just spotted Oscar who looks very sleepy.  Oscar is hugging everyone – including cops.  From Nick:

9:27am – Aimee just walked in.  She recently relocated to London.

9:25am – Mangena’s there today!  So great to see him.  I’d love to hear some testimony from him again.  Without a doubt, one of the strongest witnesses of the entire trial. 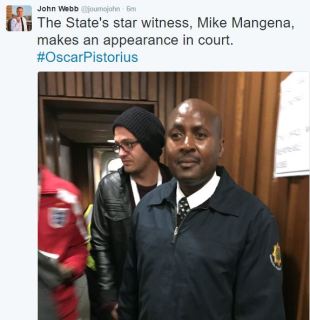 9:20am – Gina Myers is there and was reportedly giving the Steenkamps a hug.  Interesting because when we met with the Steenkamps last year, they mentioned they did not have a relationship with the Myers family due to some mistrust.  Maybe they’re just putting their differences aside for this hearing.  Gina tweeted the following this morning:

“When I look into Barry Steenkamp’s eyes, I see Reeva’s.  They’re beautiful and deep.  He’s like a big teddy bear.  Her parents are so strong.”

9:15am – It’s a full house with the Pistorius clan – Arnold, and at least one of his brothers, three of Oscar’s aunts, Carl and some other relatives are there.  No Aimee.

9:00am – Barry and June have arrived.  Kim Martin is there as well. 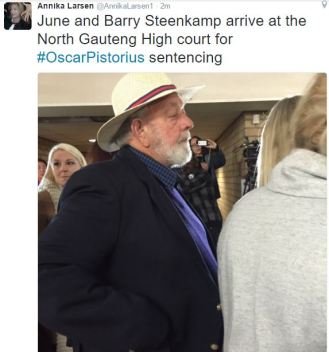 8:37am – The Hulk is in the house… Carl just arrived.  He looks pretty somber. 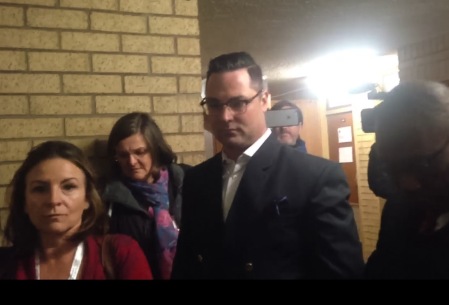 8:20am – Court should be starting in about an hour and a half.  Here are some scenes from outside the court, courtesy of Gia Nicolaides and Power987 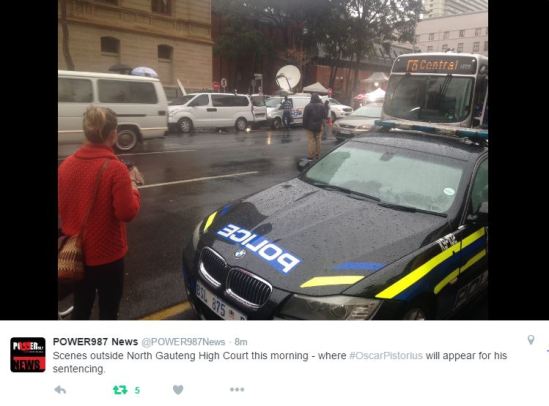 8:03am – The weather is really lousy today in SA.  As I Skyped with Nick earlier this morning (his time) I could see huge cracks of lighting outside his window.  He’s currently stuck in traffic but not that far from the courthouse.

7:25am – Ulrich Roux on the radio says Oscar needs to testify to show remorse.  He also anticipates there will be testimony from personnel at the prison commenting on Oscar’s behavior.   Roux seemed a bit confused while speaking about Kim Martin – he referred to her as Oscar’s aunt.

6:30am – The hearing is expected to last for approximately four days.  The proceedings will begin with mitigation.  Who thinks that Oscar might be the first to take the stand?  If he does, will it be the same old boohoohoo?  I personally think we will see some of that again, but it may be tempered by some feigned remorse.  Not that he’ll ever admit to doing anything wrong, I just think that he may try to go the route of acting a little more humble as opposed to his argumentative responses from the original trial.

When it’s the State’s turn, Barry Steenkamp will be speaking for the family.  It will no doubt be a gut-wrenching moment for all. 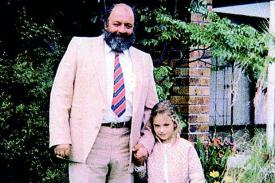 Andrea Johnson, Nel’s right hand prosecutor who’s taken on a primary role in the case, has been vocal about her disapproval of Oscar doing an interview for TV [to be aired on June 24.]  She’s said they’ll be considering the material as something that may be used in court.  She’s also publicly said if Oscar’s sentence is less than 8 years, the state will appeal Masipa’s decision… again.

For those who may not be aware, the minimum sentence required for a conviction of Dolus Eventualis is 15 years.  Judge Masipa will then apply credit for time served, as well as credit for mitigating factors, IF warranted.  Has Masipa’s sympathy for Oscar waned over the past year?  We’ll find out soon enough.

While we wait for the first arrivals at court, here’s what people are saying on Twitter… 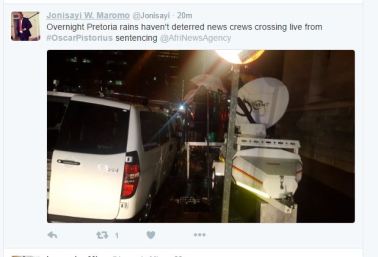 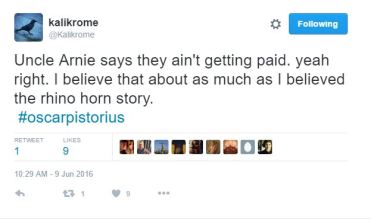 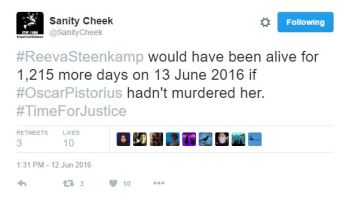 And…. we can always count on Carl to quote from the bible… 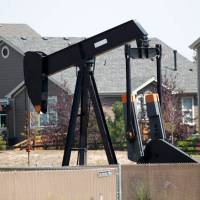