Sunday Night’s “World Exclusive” farce program – using 6-year-old clips – wasn’t entirely a waste.  They succeeded in illustrating just how crafty (and essential) the media can be when one is desperate to dodge an investigation. 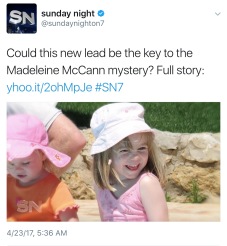 Paul Luckman, a reporter for Portugal News, shared with McCann apologist, Rahni Sadler (in one of the few new interviews conducted by the show) how he was one of the first reporters on the scene May 4th.   He snapped a few pics, from a distance, of Kate being shielded by friends.    The police weren’t so lucky.  Not only were they called to the scene much later than everybody else – no thanks to the McCanns – they couldn’t actually get close enough to the parents to carry out even the most basic of procedures, like taking their picture.  Luckman sets the scene that cops were treading lightly; they thought it was simply a matter of a child wandering off.  Really?  Apparently he’s forgotten about:  “They’ve taken her! They’ve taken her!”

Sadler:  And Kate looked out of her mind?

Luckman:  She was pretty distressed and being comforted and it was running around freely.  What mom wouldn’t be pretty much out of her mind at the thought you’d lost a child.

Sadler:  What was Kate doing?  Was she inside or outside the apartment?

Luckman:  She was outside the apartment.

Sadler:  Was she interacting with the police?

Luckman:  Yes, interacting to some degree.  I think the police were trying to take it very gently.

What else is Kate doing if she’s interacting to some degree? Is there anybody more important to be conversing with than the police when your child is missing?  For Kate and Gerry, chatting with their priest, and friends appeared to be more pressing.

Listen to Part 1 of our podcast….

DOUBT is available on Amazon